Frederick Earnest, President and CEO of Vista, stated, “We are very encouraged by the results of our ongoing drilling program, which have intersected mineralization at approximately the predicted intervals, in all seven holes drilled to date. Furthermore, the results of the three holes announced today combined with those drilled previously on Section 8435935 N strongly support our confidence that the resources in the Batman deposit can be significantly increased just north of, and immediately adjacent to the planned Batman pit.

“Drilling in our initial program is complete. We are undertaking additional drilling and have secured a second drill rig to accelerate the next program. We plan to step out to the north to test targets and assess the continuity of mineralization from the Batman deposit toward the Golf-Tollis targets, approximately a kilometer to the north. The second drill rig is expected to be on site by early April. We look forward to discussing the results of the last hole in the original program, a step-out hole 500 meters to the north, as assay results become available in the coming weeks.”

In the fourth quarter 2020, the Company commenced an eight-hole drilling program to test the continuity of mineralization north of the Batman deposit.

Results from Hole VB20-001 were announced in December 2020 (News Release) and confirmed the existence of a mineralized zone that is believed to be a connection between the main Batman structure and the Golf-Tollis structure. Results from holes VB20-002, -003, and -004 were announced in January 2021 (News Release) and confirmed the existence of mineralization to the north of the main Batman structure. Relative to the three drill holes announced in January 2021, holes VB20-005 and VB21-001 were 35 meters south and VB21-005 was 85 meters south. These holes were drilled to confirm the continuity of both mineralization and grade in an area immediately north of and outside the limits of the proposed Batman pit. 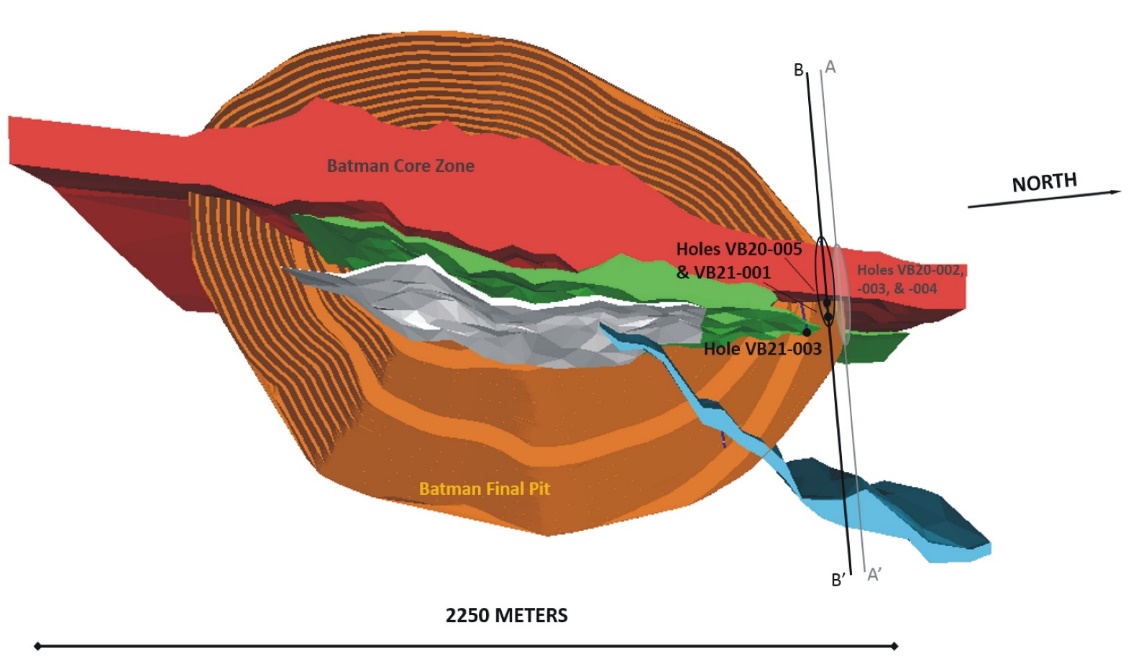 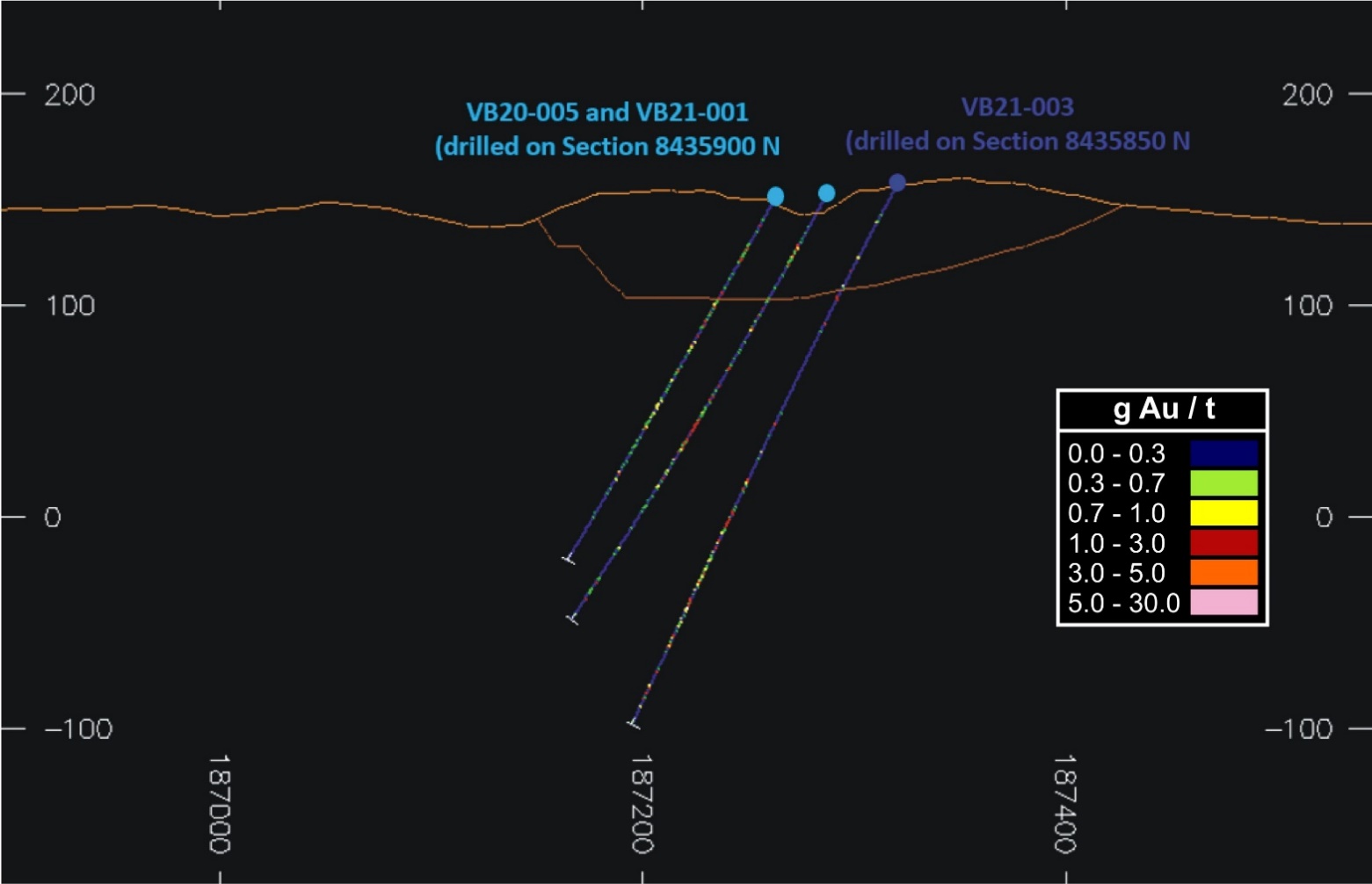 John Rozelle, Vista’s Sr. Vice President, a Qualified Person (QP) as defined by National Instrument 43-101 – Standards of Disclosure for Mineral Projects, has verified the data underlying the information contained in and has approved this press release.

Samples were placed in crates for shipping with 100 samples per crate (20 shipping bags). The crates were stacked outside the core shed until picked up for transport and shipped to NAL Pty. Ltd an independent, ISO 9000 certified lab, for standard fire assays. At the lab, the samples are pulverized and split down to 50-gram assay samples prior to assaying. The industry-standard 3 assay-ton fire assay is followed by an atomic absorption (AA) finish, except where results were greater than 3 g Au/tonne, and then a gravimetric finish was used to report final results.

The Company is a gold project developer. The Company’s flagship asset is the Mt Todd gold project in the Tier-1 mining jurisdiction of Northern Territory, Australia. Mt Todd is the largest undeveloped gold project in Australia and if developed as presently designed, would potentially be Australia’s 6th largest gold producer on an annual basis.

For further information about Vista or the Mt Todd Gold Project, please contact Pamela Solly, Vice President of Investor Relations, at (720) 981-1185 or visit the Company’s website at www.vistagold.com to access important information, including the current Technical Report.

This press release contains forward-looking statements within the meaning of the U.S. Securities Act of 1933, as amended, and U.S. Securities Exchange Act of 1934, as amended, and forward-looking information within the meaning of Canadian securities laws. All statements, other than statements of historical facts, included in this press release that address activities, events or developments that we expect or anticipate will or may occur in the future, including such things as our belief of the existence of a mineralized zone that is a connection between the main Batman structure and the Golf-Tollis structure; our belief that we have identified the extension of the Batman core zone to the north and the existence of mineralization with vertical and lateral continuity exists within and immediately adjacent to the planned Batman pit; our believe that continuity and grade exists in the Batman north extension, with mineralization coming to the surface; our belief that we have identified a definable, higher-grade envelop within the confines of the mineralized zone; our belief that drilling has intersected veining, mineralogy and gold grades comparable to those found in the core zone of the Batman deposit, suggesting no material differences in metallurgical behavior;  our belief that there may be opportunity to develop classified resources in an area within the planned ultimate pit that is currently modelled as waste material; our belief that additional drilling could confirm continuity and connectivity of the mineralized structures extending northeast to the Quigleys deposit; and our belief that Mt Todd is the largest undeveloped gold project in Australia and if developed as presently designed, would potentially be Australia’s 6th largest gold producer on an annual basis are forward-looking statements and forward-looking information. The material factors and assumptions used to develop the forward-looking statements and forward-looking information contained in this press release include the following: our approved business plans, exploration and assay results, results of our test work for process area improvements, mineral resource and reserve estimates and results of preliminary economic assessments, prefeasibility studies and feasibility studies on our projects, if any, our experience with regulators, and positive changes to current economic conditions and the price of gold. When used in this press release, the words “optimistic,” “potential,” “indicate,” “expect,” “intend,” “hopes,” “believe,” “may,” “will,” “if,” “anticipate,” and similar expressions are intended to identify forward-looking statements and forward-looking information. These statements involve known and unknown risks, uncertainties and other factors which may cause the actual results, performance or achievements of the Company to be materially different from any future results, performance or achievements expressed or implied by such statements. Such factors include, among others, uncertainty of resource and reserve estimates, uncertainty as to the Company’s future operating costs and ability to raise capital; risks relating to cost increases for capital and operating costs; risks of shortages and fluctuating costs of equipment or supplies; risks relating to fluctuations in the price of gold; the inherently hazardous nature of mining-related activities; potential effects on our operations of environmental regulations in the countries in which it operates; risks due to legal proceedings; risks relating to political and economic instability in certain countries in which it operates; uncertainty as to the results of bulk metallurgical test work; and uncertainty as to completion of critical milestones for Mt Todd; as well as those factors discussed under the headings “Note Regarding Forward-Looking Statements” and “Risk Factors” in the Company’s latest Annual Report on Form 10-K as filed February 26, 2021 and other documents filed with the U.S. Securities and Exchange Commission and Canadian securities regulatory authorities. Although we have attempted to identify important factors that could cause actual results to differ materially from those described in forward-looking statements and forward-looking information, there may be other factors that cause results not to be as anticipated, estimated or intended. Except as required by law, we assume no obligation to publicly update any forward-looking statements or forward-looking information; whether as a result of new information, future events or otherwise.