The Batman Deposit – One of a Kind, or Just the First for Vista Gold?

The Mt Todd Gold Project is located in the Northern Territory (NT) of Australia. Within the NT, there is a geologic region known as the Pine Creek Geosyncline (PCG).  The PCG hosts a large number of mineral occurrences and a number of operating mines.

Why is the Pine Creek Geosyncline an attractive location for a company like Vista?

The Pine Creek Geosyncline is of Proterozoic age. Globally, rocks of this age host more gold than any other age, except for the Archean. It has more than 250 identified gold deposits. Mines from the PCG have produced in excess of 20 million ounces of gold. To date, there are five plus 1 million-ounce deposits that have been identified.

Why has this area been less explored than other areas in Australia?

How does the Batman deposit compare to other gold deposits in the geosyncline?

The Batman deposit’s nearly 10 million resource ounces represents the largest sheet-vein style deposit located in the PCG to date, thus making it quite unique. The main portion of the deposit is approximately 1.6 km in length, 200-250 meters in width and reaches a depth of more than 700 meters. Two parallel mineralized zones (as shown in the following image) on the east side of the deposit have been identified. 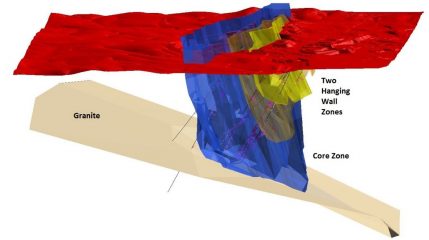 Are there other Batman like deposits in the geosyncline?

Vista is evaluating the land contained in its package of Exploration Licenses (ELs) for both Batman style deposits and other gold deposits. Vista is concentrating on identifying characteristics similar to the major features of the Batman deposit, including targets that:

To date, Vista has identified several locations on the ELs that exhibit some or all of the important features of the Batman deposit.