Denver, Colorado, July 15, 2021 – Vista Gold Corp. (NYSE American and TSX: VGZ) (“Vista” or the “Company”) today announced assay results for ongoing drilling at the Company’s 100% owned Mt Todd gold project (“Mt Todd” or the “Project”) located in Northern Territory, Australia. The mineralization intersected in hole VB21-011 is both thicker and of higher grade than observed in previous drill holes in the current program.

Frederick Earnest, President and CEO commented, “We have now completed 16 of 18 holes (5,466 of the planned 6,000 meters) in our current drill program. Each of the holes completed has intersected mineralization consistent with our geologic model for the area north of the Batman deposit. We are pleased that VB21-011 has demonstrated strike continuity of the mineralization intersected in the Northern cross load (Nxld). VB21-011 was collared 100 meters north of VB21-005 (29.4m @ 2.65 g/t) and has defined a number of well mineralized zones that aggregate into a thicker package. The Nxld intercepts have so far been of a higher grade than those intersected in Batman and we are looking forward to additional drilling planned in this area.” See Vista Gold CEO Video.

On a separate topic, Mr. Earnest added, “We appreciate the support of our current large shareholders in the recently completed financing and are pleased to welcome several new shareholders who have established significant initial holdings in Vista. We believe this is a recognition of the underlying value of Mt Todd and the opportunity to unlock greater value as we continue to execute on a strategy that has already seen important advances in the Project.”

VB21-010 was drilled to locate the intersection of the northern cross load structure with the north/south structure through the Golf-Tollis deposit. The hole was drilled to the East under the possible extension of the Golf-Tollis deposit and intersected the Jones Brothers deposit to the East. Although the hole was collared to the East for the Golf-Tollis extension, it intersected the Jones Brother loads 1 and 2. Those intersections are shown in the assay table as 0.4 meters @ 9.38 g Au/t and 1.0 meters @ 14.36 g Au/t. The Jones Brothers lode was mined historically as narrow, near vertical open cuts and limited underground workings from 1908 to 1910. Material from these workings was reported to have produced 19 Kg (~610 ounces) of gold from ore with an average grade of 27.5 g Au/t. (Historic reference, not a mineral reserve).

VB21-011 was drilled under VB21-007 and along strike north of VB21-002 and VB21-005 to test the continuation of near vertical structures previously encountered. Drilling confirmed a thickening of these in VB21-011, with mineralization that is different than found at the Batman deposit, with thicker and more intense veining. The area to the north of the Batman deposit appears to be more structurally complex than the Batman deposit; however, these differences offer opportunities to find higher-grade mineralization. VB21-011 has shown that there is both horizontal and vertical continuity. Figure 2 demonstrates the thickening of the mineralized structures with depth compared to the results of hole VB21-007. 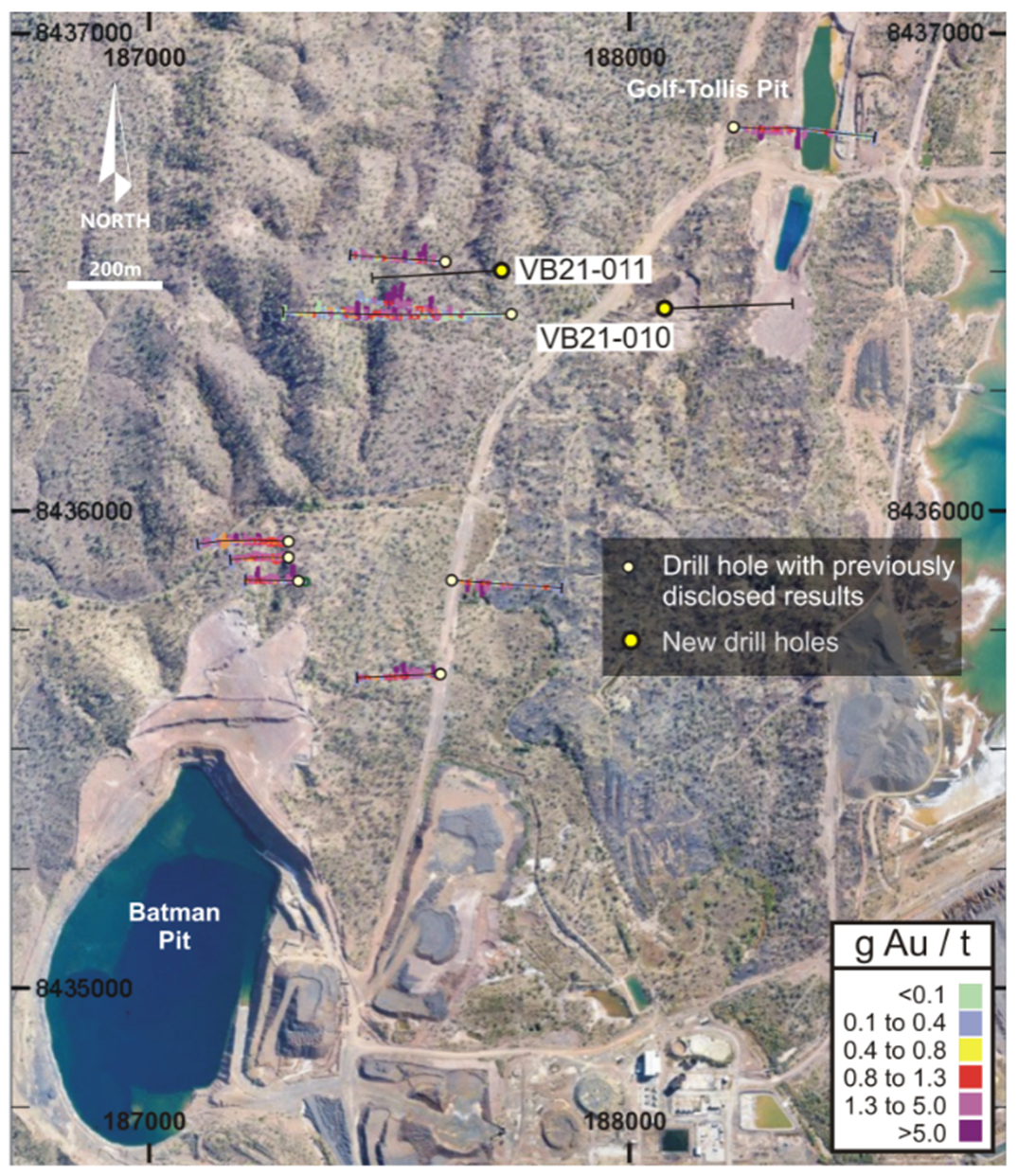 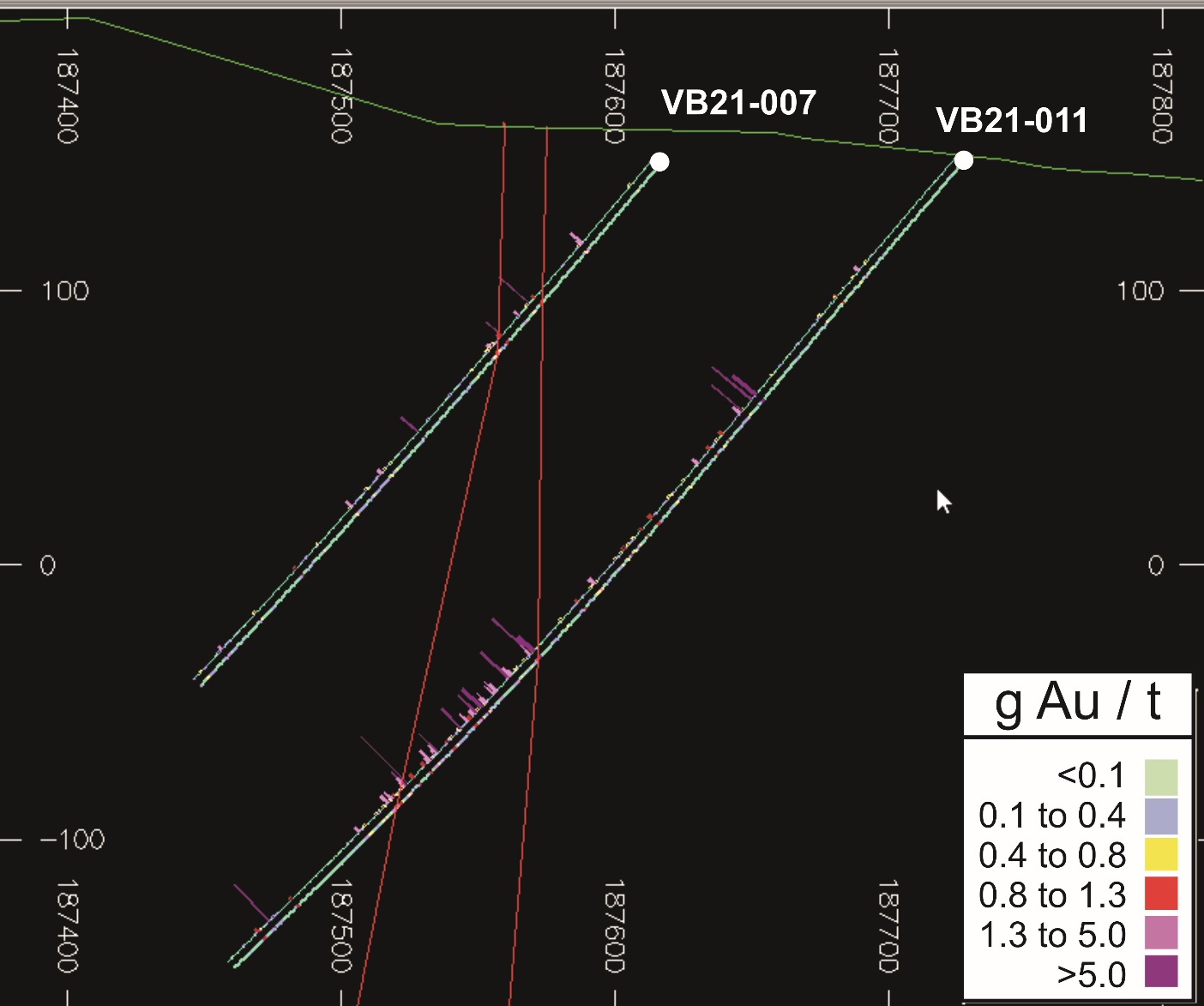 This press release contains forward-looking statements within the meaning of the U.S. Securities Act of 1933, as amended, and U.S. Securities Exchange Act of 1934, as amended, and forward-looking information within the meaning of Canadian securities laws. All statements, other than statements of historical facts, included in this press release that address activities, events or developments that we expect or anticipate will or may occur in the future, including such things as our belief that VB21-011 has demonstrated strike continuity of the mineralization intersected in the Northern cross load; our belief that VB21-010 intersected the Jones Brothers lodes 1 and 2; our belief that VB21-011 confirmed thickening and more intense veining; our believe that the area to the north of the Batman deposit appears to be more structurally complex than the Batman deposit and the differences offer opportunities to find higher-grade mineralization; and our belief that Mt Todd is the largest undeveloped gold project in Australia are forward-looking statements and forward-looking information. The material factors and assumptions used to develop the forward-looking statements and forward-looking information contained in this press release include the following: our approved business plans, exploration and assay results, results of our test work for process area improvements, mineral resource and reserve estimates and results of preliminary economic assessments, prefeasibility studies and feasibility studies on our projects, if any, our experience with regulators, and positive changes to current economic conditions and the price of gold. When used in this press release, the words “optimistic,” “potential,” “indicate,” “expect,” “intend,” “hopes,” “believe,” “may,” “will,” “if,” “anticipate,” and similar expressions are intended to identify forward-looking statements and forward-looking information. These statements involve known and unknown risks, uncertainties and other factors which may cause the actual results, performance or achievements of the Company to be materially different from any future results, performance or achievements expressed or implied by such statements. Such factors include, among others, uncertainties inherent in the exploration of mineral properties, the possibility that future exploration results will not be consistent with the Company's expectations; there being no assurance that the exploration program or programs of the Company will result in expanded mineral resources; uncertainty of mineral resource and reserve estimates, uncertainty as to the Company’s future operating costs and ability to raise capital; risks relating to cost increases for capital and operating costs; risks of shortages and fluctuating costs of equipment or supplies; risks relating to fluctuations in the price of gold; the inherently hazardous nature of mining-related activities; potential effects on our operations of environmental regulations in the countries in which it operates; risks due to legal proceedings; risks relating to political and economic instability in certain countries in which it operates; uncertainty as to the results of bulk metallurgical test work; and uncertainty as to completion of critical milestones for Mt Todd; as well as those factors discussed under the headings “Note Regarding Forward-Looking Statements” and “Risk Factors” in the Company’s latest Annual Report on Form 10-K as filed February 25, 2021 and other documents filed with the U.S. Securities and Exchange Commission and Canadian securities regulatory authorities. Although we have attempted to identify important factors that could cause actual results to differ materially from those described in forward-looking statements and forward-looking information, there may be other factors that cause results not to be as anticipated, estimated or intended. Except as required by law, we assume no obligation to publicly update any forward-looking statements or forward-looking information; whether as a result of new information, future events or otherwise.