Denver, Colorado, June 30, 2021 – Vista Gold Corp. (NYSE American and TSX: VGZ) (“Vista” or the “Company”) today announced assay results for drilling at the Company’s Mt Todd gold project (“Mt Todd” or the “Project”). Four additional holes have been completed north of the Batman deposit which demonstrate that Vista’s model of the controlling structures is reliable in predicting where mineralization is most likely to be encountered.

Frederick Earnest, President and CEO commented, “The ongoing drilling continues to confirm our structural and geological interpretations north of the Batman deposit and, given the significant area within the Batman-Driffield structural corridor, increases our confidence in the potential for future mineral resource growth at Mt Todd, with the appropriate future in-fill drilling. Based on our model, each of the holes that we reported today targeted specific structures and not only confirmed our structural interpretations, but also increased our understanding of the size, orientation, and gold-bearing potential of the mineralized structures north of the Batman deposit. Drilling is ongoing to further expand our understanding of the mineralized structures in this area and additional drilling is planned to systematically expand our understanding of the geologic potential of the area toward the Golf-Tollis and Penguin targets to the north.” 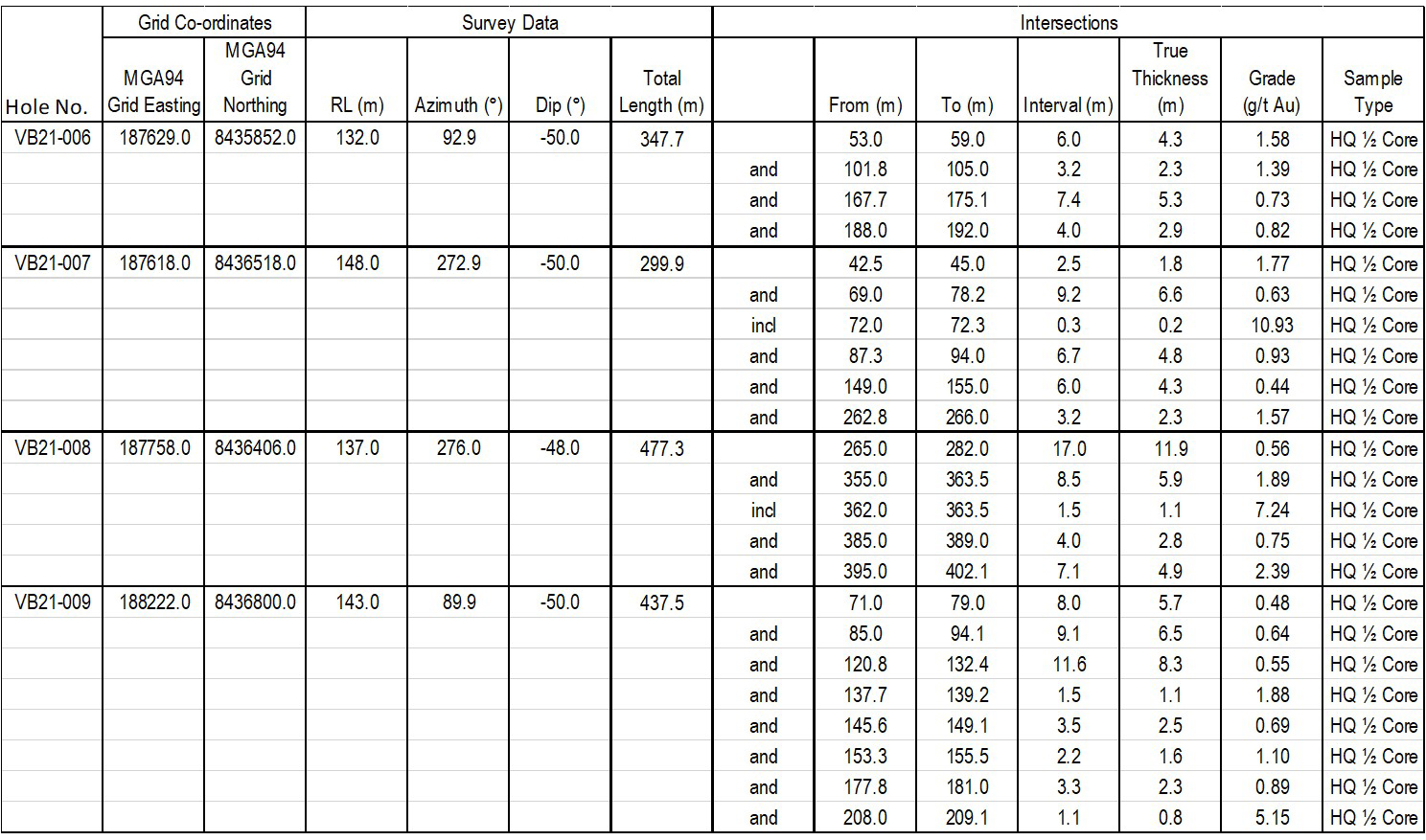 Our current exploration program has concentrated on the southern portion of the Batman-Driffield structural corridor between the Batman deposit and the Golf-Tollis deposits. This area has a significant amount of shallow historic drilling, and when combined with past geochemical and magnetic studies has allowed us to develop a new geologic model. Most importantly, current drilling suggests that what were thought to be discrete deposits, may actually be part of a continuous mineralized trend, both horizontally and vertically. To date, we have not drilled a diamond core hole within the Batman-Driffield structural corridor that was absent of any mineralized intercepts. 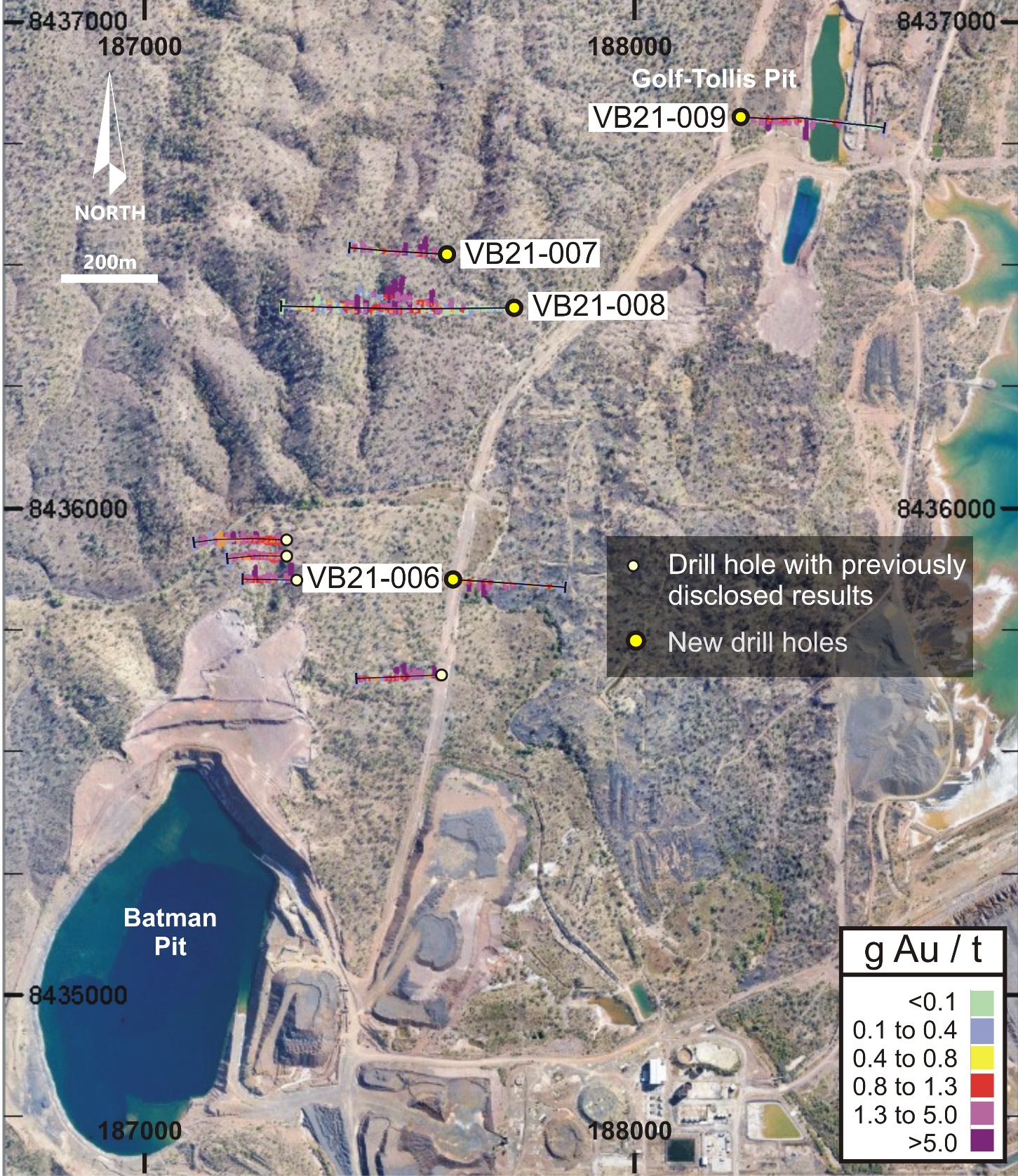 This press release contains forward-looking statements within the meaning of the U.S. Securities Act of 1933, as amended, and U.S. Securities Exchange Act of 1934, as amended, and forward-looking information within the meaning of Canadian securities laws. All statements, other than statements of historical facts, included in this press release that address activities, events or developments that we expect or anticipate will or may occur in the future, including such things as our belief that drill results from VB21-006 through 009 demonstrate that our exploration model is proving to be reliable in predicting where mineralization is most likely to be encountered based on our improved understanding of the controlling structures; our belief that ongoing drilling continues to confirm our structural and geological interpretation and increases our confidence in the potential for future mineral resource growth at Mt Todd; our belief that the holes reported today increased our understanding of the size, orientation, and gold-bearing potential of the mineralized structures north of our Batman deposit; our belief that current drilling suggests that what were thought to be discrete deposits may actually be part of a continuous mineralized trend; our belief that ongoing and planned additional drilling will further expand our understanding of mineralized structures in the area and systematically increase our understanding of the geologic potential in the area; and our belief that Mt Todd is the largest undeveloped gold project in Australia are forward-looking statements and forward-looking information. The material factors and assumptions used to develop the forward-looking statements and forward-looking information contained in this press release include the following: our approved business plans, exploration and assay results, results of our test work for process area improvements, mineral resource and reserve estimates and results of preliminary economic assessments, prefeasibility studies and feasibility studies on our projects, if any, our experience with regulators, and positive changes to current economic conditions and the price of gold. When used in this press release, the words “optimistic,” “potential,” “indicate,” “expect,” “intend,” “hopes,” “believe,” “may,” “will,” “if,” “anticipate,” and similar expressions are intended to identify forward-looking statements and forward-looking information. These statements involve known and unknown risks, uncertainties and other factors which may cause the actual results, performance or achievements of the Company to be materially different from any future results, performance or achievements expressed or implied by such statements. Such factors include, among others, uncertainties inherent in the exploration of mineral properties, the possibility that future exploration results will not be consistent with the Company's expectations; there being no assurance that the exploration program or programs of the Company will result in expanded mineral resources; uncertainty of mineral resource and reserve estimates, uncertainty as to the Company’s future operating costs and ability to raise capital; risks relating to cost increases for capital and operating costs; risks of shortages and fluctuating costs of equipment or supplies; risks relating to fluctuations in the price of gold; the inherently hazardous nature of mining-related activities; potential effects on our operations of environmental regulations in the countries in which it operates; risks due to legal proceedings; risks relating to political and economic instability in certain countries in which it operates; uncertainty as to the results of bulk metallurgical test work; and uncertainty as to completion of critical milestones for Mt Todd; as well as those factors discussed under the headings “Note Regarding Forward-Looking Statements” and “Risk Factors” in the Company’s latest Annual Report on Form 10-K as filed February 25, 2021 and other documents filed with the U.S. Securities and Exchange Commission and Canadian securities regulatory authorities. Although we have attempted to identify important factors that could cause actual results to differ materially from those described in forward-looking statements and forward-looking information, there may be other factors that cause results not to be as anticipated, estimated or intended. Except as required by law, we assume no obligation to publicly update any forward-looking statements or forward-looking information; whether as a result of new information, future events or otherwise.