DENVER, April 30, 2021 (GLOBE NEWSWIRE) -- Vista Gold Corp. (NYSE American and TSX: VGZ) (“Vista” or the “Company”) today announced its unaudited financial results for the quarter ended March 31, 2021, which are highlighted by reported cash and cash equivalents of $7.2 million. All dollar amounts in this press release are in U.S. dollars.

Frederick H. Earnest, President and Chief Executive Officer of Vista, commented, “Our management team achieved solid cost and capital management performance and strong execution toward our core objectives, including the advancement of the Mt Todd Mining Management Plan to the final stage of review and approval and excellent results from our ongoing drilling program. Additionally, we continued efforts to seek a strategic partner for the development of Mt Todd, maintained our outstanding safety record having achieved 1,437 days without a lost time incident, substantially dewatered the Batman pit, and held the first meeting of the newly-formed Leaders Forum with the Jawoyn Association Aboriginal Corporation.

“We anticipate approval of the Mining Management Plan in the very near future, and see a tremendous opportunity over the next 12 months to close the gap between our market cap and the intrinsic value of Mt Todd by continuing our drilling program to demonstrate the potential to significantly expand gold resources and by advancing our feasibility studies. Both activities are aligned with our continuing efforts to bring value to our shareholders and establish a strategic partnership. We remain committed to achieving a structure that provides appropriate opportunity for value creation by recognizing the intrinsic value of Mt Todd and minimizes the potential for future dilution.” 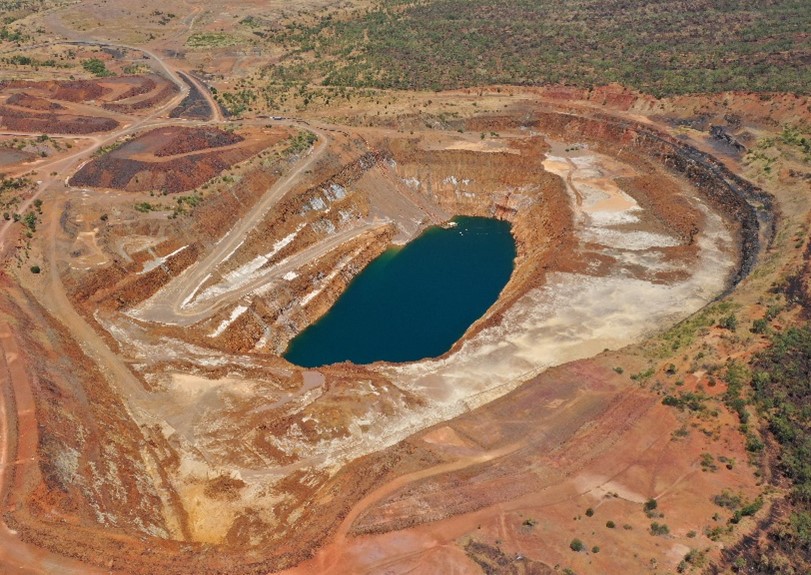 At March 31, 2021, cash and cash equivalents totaled $7.2 million. We benefited during the quarter from receipt of $1.1 million related to Guadalupe de los Reyes and continued control over our base expenditures. This allowed us to commit additional funds to the drilling program. For consideration, Vista extended the due date for the remaining $2.5 million option payment payable to Vista for cancellation of the Awak Mas royalty until not later than January 31, 2022.

The Company made the decision to expand its drilling program during the quarter and is planning an additional 10 holes (approx. 3,000 meters). The first phase of drilling provided our geologists with greater understanding of the location and inter-relation of mineralized structures and cross-structures connecting the Batman deposit and the Golf-Tollis targets. Ongoing drilling is focused on hinge points and intersections of these structures which typically provide the best conditions for the deposition of gold in quartz-calcite-sulfide veins.

The initial program of nine holes totaled 2,640 meters and was completed during Q1. Results of eight holes have been announced to date, with each hole intersecting mineralized structures approximately as targeted. Intercepts were generally thicker than anticipated intervals and encountered higher than expected gold grades. Refer to Figure 1 for drill hole locations to date. 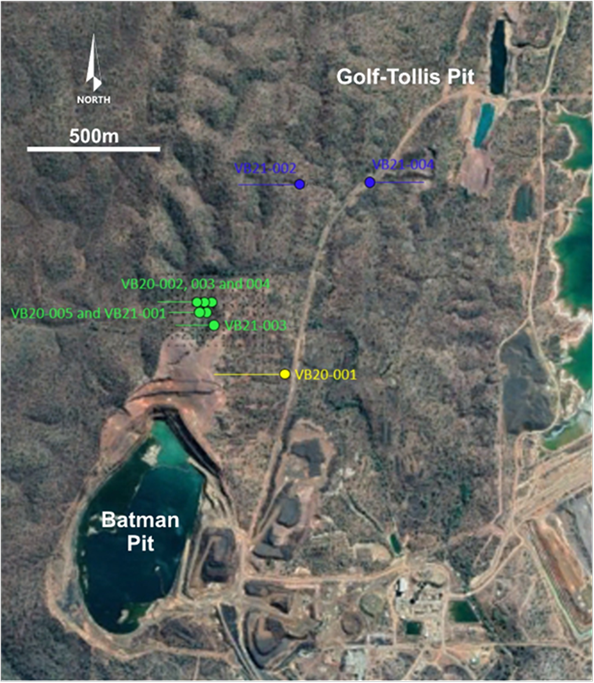 Mr. Earnest commented, “Our historical success in significantly increasing the known size of the Batman deposit through deep drilling and our recent success drilling deep holes along known, but undrilled structural targets reaffirms our belief that there is excellent opportunity for significant resource growth at Mt Todd. We believe that the potential to significantly extend the life of Mt Todd is important to potential partners. Our present drilling program is planned to demonstrate that potential and unlock the door to greater value recognition.”

Highlights from first phase of drilling include:

Management’s quarterly conference call to review financial results for the quarter ended March 31, 2021 and to discuss corporate and project activities is scheduled for Tuesday, May 4, 2021 at 10:00 am MDT (12:00 pm EDT).

If you are unable to access the audio or phone-in on the day of the conference call, please email your questions to This email address is being protected from spambots. You need JavaScript enabled to view it..

This press release contains forward-looking statements within the meaning of the U.S. Securities Act of 1933, as amended, and U.S. Securities Exchange Act of 1934, as amended, and forward-looking information within the meaning of Canadian securities laws. All statements, other than statements of historical facts, included in this press release that address activities, events or developments that we expect or anticipate will or may occur in the future, including such things as our belief that there is tremendous opportunity over the next 12 months to close the gap between our market cap and the intrinsic value of Mt Todd by completing a feasibility study and drilling to demonstrate the potential for resource growth north of the Batman deposit; our plan to achieve a structure that provides appropriate opportunity for value creation by recognizing the intrinsic value of Mt Todd and minimizes the potential for future dilution; our belief that there is tremendous opportunity for significant resource growth at Mt Todd and the potential to significantly extend the life of mine; our belief that the South Cross Structure is a connection between the Batman and Golf-Tollis structures; our belief that the Batman North Extension intercepted veining, mineralogy and gold grades are comparable to the Batman deposit and suggest no material differences in metallurgical behavior; our belief that the results of the six drill holes targeting the Batman North Extension present opportunity to develop classified resources both within the planned Batman pit from material currently interpreted as waste and externally to the north; our belief that the results of the first step-out hole drilled 500 meters north-northeast demonstrate the strong potential for continuity of gold mineralization along the Batman-Driffield Structural Trend; and our belief that Mt Todd is the largest undeveloped gold project in Australia are forward-looking statements and forward-looking information. The material factors and assumptions used to develop the forward-looking statements and forward-looking information contained in this press release include the following: our approved business plans, exploration and assay results, results of our test work for process area improvements, mineral resource and reserve estimates and results of preliminary economic assessments, prefeasibility studies and feasibility studies on our projects, if any, our experience with regulators, and positive changes to current economic conditions and the price of gold. When used in this press release, the words “optimistic,” “potential,” “indicate,” “expect,” “intend,” “hopes,” “believe,” “may,” “will,” “if,” “anticipate,” and similar expressions are intended to identify forward-looking statements and forward-looking information. These statements involve known and unknown risks, uncertainties and other factors which may cause the actual results, performance or achievements of the Company to be materially different from any future results, performance or achievements expressed or implied by such statements. Such factors include, among others, uncertainties inherent in the exploration of mineral properties, the possibility that future exploration results will not be consistent with the Company's expectations; there being no assurance that the exploration program or programs of the Company will result in expanded mineral resources; uncertainty of resource and reserve estimates, uncertainty as to the Company’s future operating costs and ability to raise capital; risks relating to cost increases for capital and operating costs; risks of shortages and fluctuating costs of equipment or supplies; risks relating to fluctuations in the price of gold; the inherently hazardous nature of mining-related activities; potential effects on our operations of environmental regulations in the countries in which it operates; risks due to legal proceedings; risks relating to political and economic instability in certain countries in which it operates; uncertainty as to the results of bulk metallurgical test work; and uncertainty as to completion of critical milestones for Mt Todd; as well as those factors discussed under the headings “Note Regarding Forward-Looking Statements” and “Risk Factors” in the Company’s latest Annual Report on Form 10-K as filed February 25, 2021 and other documents filed with the U.S. Securities and Exchange Commission and Canadian securities regulatory authorities. Although we have attempted to identify important factors that could cause actual results to differ materially from those described in forward-looking statements and forward-looking information, there may be other factors that cause results not to be as anticipated, estimated or intended. Except as required by law, we assume no obligation to publicly update any forward-looking statements or forward-looking information; whether as a result of new information, future events or otherwise.