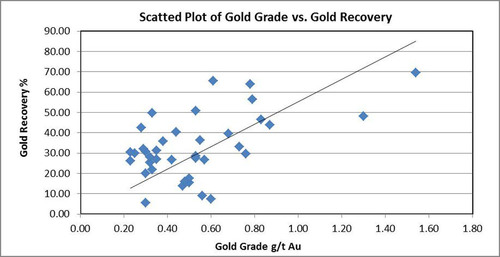 In order to evaluate this potential, Vista initiated an evaluation of the existing heap leach pad in December 2011 by completing 12 drill holes and collecting 165 one-meter samples (two were damaged in transit). The one-meter assays were submitted to Northern Australia Laboratories ("NAL") in Pine Creek, Australia, for analysis. In April 2012, Vista completed an additional 12 drill holes and collected 160 one-meter samples which were also submitted to NAL for analysis. The results are presented in the following tables.

Historic records indicate that the existing heap leach pad has between 13.2 and 18 million tonnes of crushed, agglomerated material on it.

Fred Earnest, Vista's President & CEO, stated "The drilling and subsequent bottle roll test results from the existing Mt. Todd heap leach pad are causing us to consider some new aspects of the Mt. Todd gold project. The potential to convert what we had previously considered to be a brownfield site liability to a potential revenue generating component of the project could represent a potentially significant source of additional value. We are in the process of evaluating the potentially favorable implications and timing of gold production from the existing heap leach pad and believe that the heap leach pad should be incorporated into the definitive Mt. Todd feasibility study. We are currently evaluating the impact this may have on our current feasibility study."

The samples were obtained using a rotary aircore drill and were collected by employees or contractors of the Company or its subsidiaries under the direction of Vista's Vice President of Exploration, Mr. Frank Fenne P.G., who is a "qualified person" within the meaning of Canadian National Instrument 43-101?Standards of Disclosure for Mineral Projects. The reported assays are from an initial split that were prepared and assayed by NAL. These assays were used to select composites that were subsequently assayed by ALS/Ammtec.

Mr. Frank Fenne has approved the scientific and technical information disclosed in this press release.

Vista is focused on the development of the Mt. Todd gold project in Northern Territory, Australia, to achieve its goal of becoming a gold producer. Vista is advancing exploration on its Guadalupe de los Reyes gold/silver project in Mexico and has granted Invecture Group, S.A. de C.V. a right to earn a 62.5% interest in the Concordia gold project in Mexico. Vista's other holdings include the Awak Mas gold project in Indonesia and the Long Valley gold project in California. For more information about our projects, including technical studies and resource estimates, please visit our website at www.vistagold.com.

This press release contains forward-looking statements within the meaning of the U.S. Securities Act of 1933, as amended, and U.S. Securities Exchange Act of 1934, as amended, and forward-looking information within the meaning of Canadian securities laws. All statements, other than statements of historical facts, included in this press release that address activities, events or developments that Vista expects or anticipates will or may occur in the future, including such things as, expected exploration results, expected timing for results of the column leach testing, potential to convert brownfield site liability to a revenue generating component of the Mt. Todd gold project resulting in a potentially significant source of additional value, potential for favorable implications and timing of gold production from the existing heap leach pad at the Mt. Todd gold project, the inclusion of the heap leach pad into the definitive Mt. Todd feasibility study, the completion of a feasibility study for the Mt. Todd gold project, and other such matters are forward-looking statements and forward-looking information. The material factors and assumptions used to develop the forward-looking information and the forward-looking information contained in this press release include the following: results of feasibility studies, mineral resource and reserve estimates, exploration and assay results, terms and conditions of our agreements with contractors and our approved business plan. When used in this press release, the words "optimistic," "potential," "indicate," "expect," "intend," "hopes," "believe," "may," "will," "if," "anticipate," and similar expressions are intended to identify forward-looking statements and forward-looking information. These statements involve known and unknown risks, uncertainties and other factors which may cause the actual results, performance or achievements of Vista to be materially different from any future results, performance or achievements expressed or implied by such statements. Such factors include, among others, uncertainty of resource estimates, estimates of results based on such resource estimates; risks relating to completing column leach testing; risks relating to cost increases for capital and operating costs; risks relating to delays in the completion of anticipated drilling activities at the Mt. Todd gold project, risks related to the timing and the ability to obtain the necessary permits, risks of shortages and fluctuating costs of equipment or supplies; risks relating to fluctuations in the price of gold; the inherently hazardous nature of mining-related activities; potential effects on Vista's operations of environmental regulations in the countries in which it operates; risks due to legal proceedings; risks relating to political and economic instability in certain countries in which it operates; as well as those factors discussed under the headings "Note Regarding Forward-Looking Statements" and "Risk Factors" in Vista's Amendment No. 1 to its Annual Report on Form 10-K as filed on April 5, 2012 and other documents filed with the U.S. Securities and Exchange Commission and Canadian securities regulatory authorities. Although Vista has attempted to identify important factors that could cause actual results to differ materially from those described in forward-looking statements and forward-looking information, there may be other factors that cause results not to be as anticipated, estimated or intended. Except as required by law, Vista assumes no obligation to publicly update any forward-looking statements or forward-looking information; whether as a result of new information, future events or otherwise.